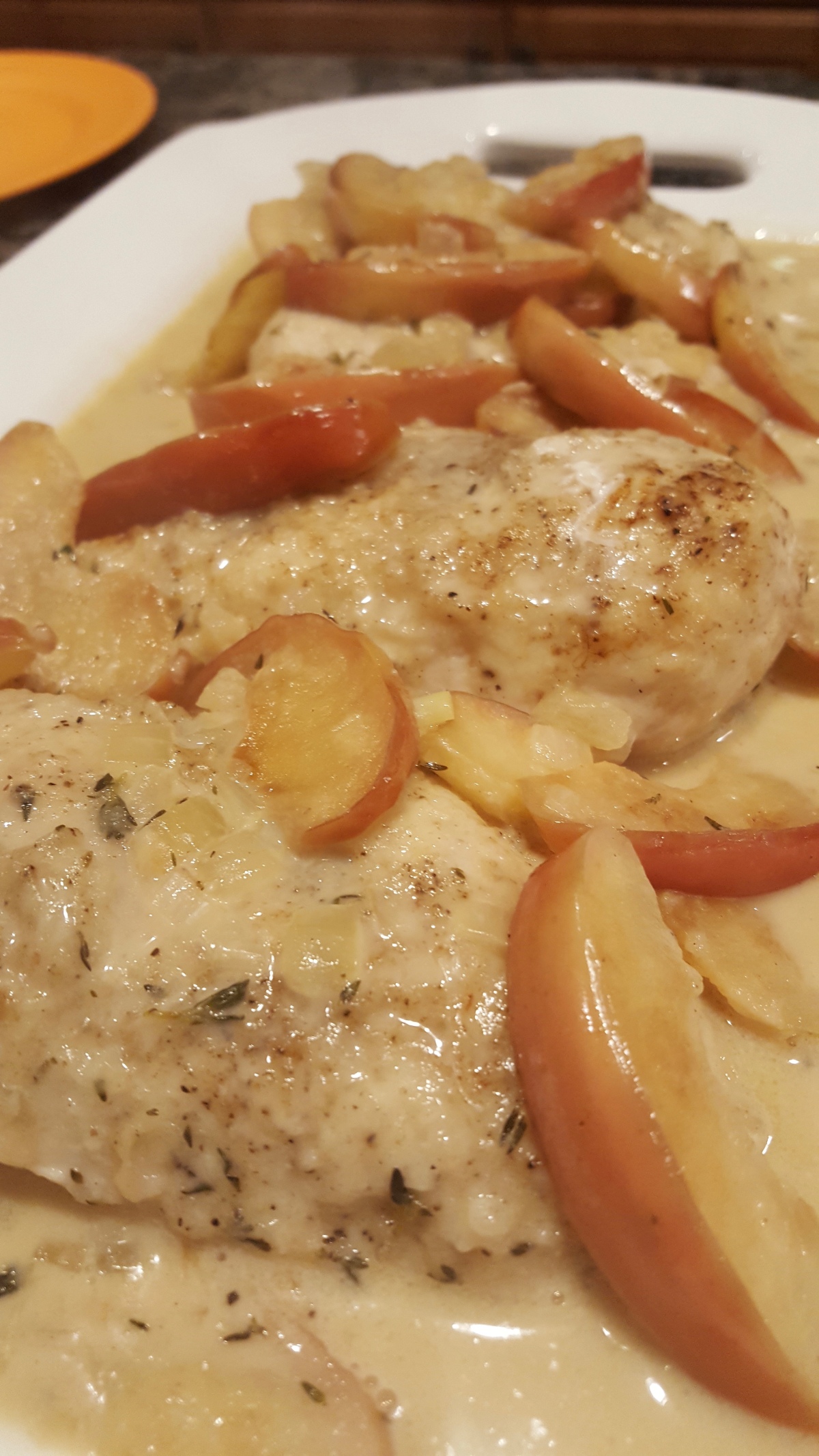 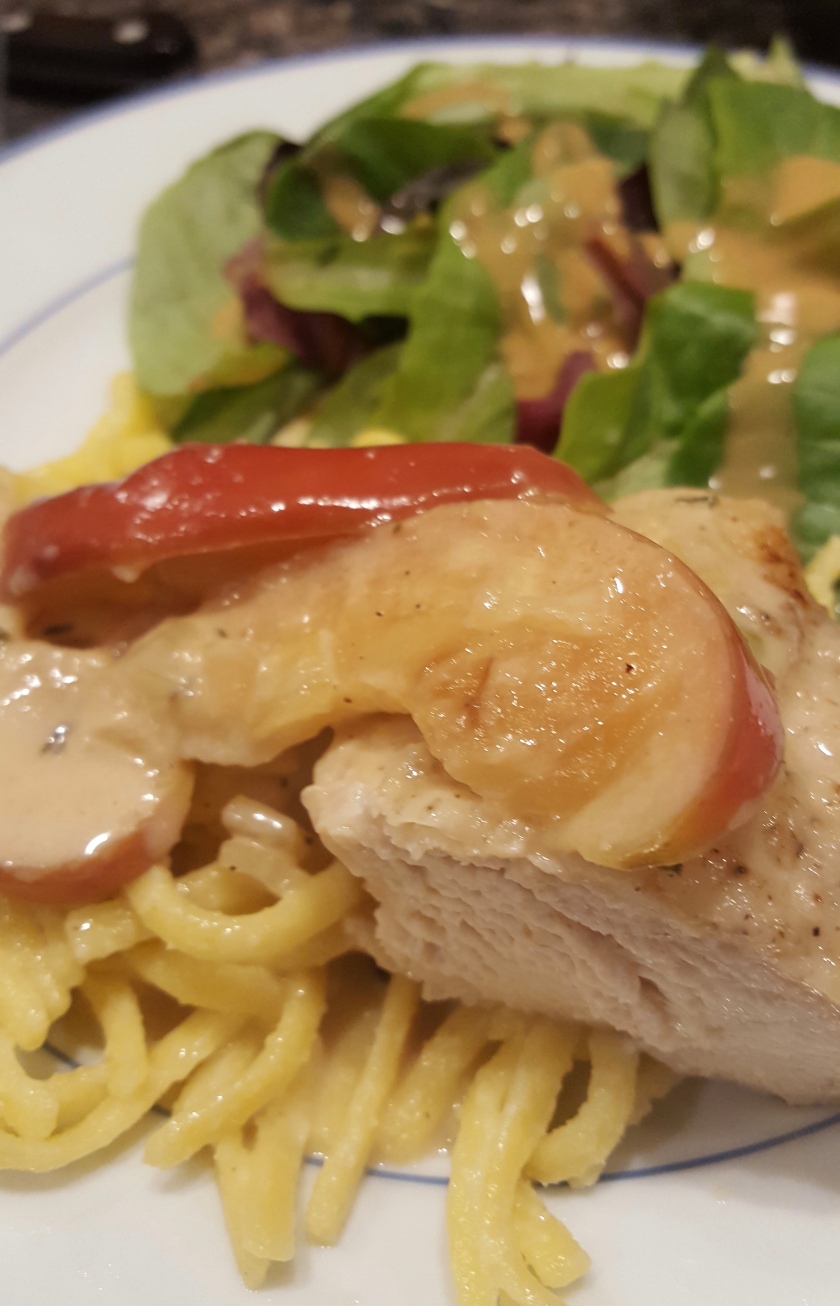 I’d love to have some tender anecdote about cooking comfort food and the season, but ultimately this dish made the cut this week because we already had most of the ingredients. I did buy apples specifically for this because ours are Honeycrisps as big as Meatball’s head, and I found a great deal on the chicken (it was a day from expiring and 50% off) so I didn’t thaw what we already had. I also had to buy cider, but the boys go crazy for it so I got to be the favorite parent for about 45 seconds.

If you happen to be a member of Cook’s Country dot com, the original recipe is here . We get the magazine (this one is in the February/March 2017 issue) but do not subscribe to the website, so I’m having to do some extra legwork here. You’re welcome. (It’s a fantastic publication, by the way, with tried and tested recipes that are impressive yet accessible.)

Pat chicken dry with paper towels and season with salt and pepper. Spread flour in a shallow dish. Dredge chicken in flour to coat, shaking to remove excess; transfer to plate and set aside. I didn’t change this step except I needed more flour for the freakishly large chicken breasts. I don’t see why you couldn’t just shake it all together in a gallon bag, though. Fewer dishes!

Melt 2 tablespoons butter in 12-inch nonstick skillet over medium heat. I didn’t realize until I was putting the pan away after making this whole thing and washing it that I used a 10 inch skillet. Aside from having to brown the apples and chicken in batches, everything worked out perfectly well. Season apples with salt and pepper. Cook apples, cut sides down, until browned, about 5 minutes per side, moving and redistributing apples as needed for even browning. Transfer to second plate, set aside. Cut sides down seems pretty self-evident to me here. How else would you brown sliced apples? Anyone? Also, use BUTTER. REAL BUTTER. Related to this, every apple I eat from now on must be browned in butter. If you taste one before the rest of the dish is done, try to save a few for the family. They are that good.

Melt remaining tablespoon butter in now-empty skillet over medium heat. Add chicken and cook until lightly browned, about 2 minutes per side. Return chicken to plate. Yes, it’s okay to put the browned chicken back on the raw chicken plate. It freaked me out, too, but you’re going to cook the chicken through in the sauce later.

Add onion, thyme, 1/4 teaspoon each of salt and pepper to now-empty skillet and cook over medium heat until onion is softened and browned, 5-7 minutes. This recipe really likes to point out that after you take the food out of the skillet, it is now empty. Push the onions around a bit to pick up and bits in the bottom of the pan.

Add cider and broth and bring mixture to a boil. Return chicken to skillet (which is presently NOT empty). Reduce heat to medium low, cover, and simmer until chicken registers 160 degrees, 8-12 minutes. IF you have 6-8 ounce chicken pieces. I let mine go 15 and two of them needed about 20 minutes. 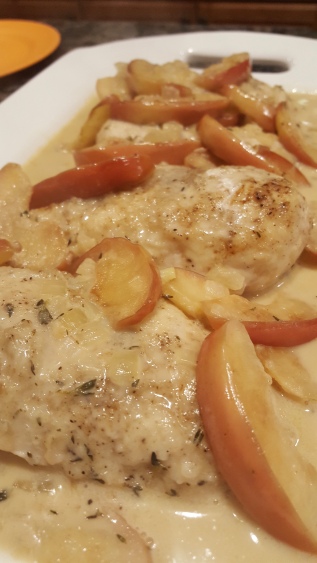 Transfer the chicken to platter and tent with aluminum foil. NOW is the time for a
clean vessel for the chicken. Add cream and apples to skillet. Increase heat to medium-high and bring to a boil. Cook until sauce has thickened slightly, about 2 minutes. Stir in vinegar and any accumulated juices. Season with salt and pepper to taste. I didn’t feel the need to add any salt, but a few grinds of pepper went in. Spoon sauce and apples over chicken and sprinkle with chives. Or don’t. Serve.

I served this over Spaetzle, German egg noodles. Over them for the grown-ups, anyway. The boys had their usual deconstructed dinners. 6 thumbs up for this one, the boys thought the apples were weird. The recipe with 3+ pounds of breast meat made 4 adult dinners, 4 kid dinners, and a lunch.