Peanut and Meatball returned to school after the holiday break on January 2nd. They also went to school on January 3rd, but then it snowed and they had snow days on the 4th and 5th. Meatball was also sick on these days so we made popcorn, watched movies, did Shrinky Dinks (still just as fun to press my nose against the oven door and watch them as it was when I was the boys’ ages), and busted out some new colored pencils and sketch books. Over the weekend Meatball was feeling better so they played in the yard, went sledding in the woods with Wombat, and we all made the short drive to a neighborhood hill for bigger, faster sledding. On Monday the 8th, they returned once more to school.

Then it rained, and the rain froze. The county turned into an ice rink overnight. A two hour delay became a school cancellation for Tuesday January 9th. It was an ice day.

I’d already used all of my aces in all of the holes.

What were we going to do? I’ll tell you what we did. ALL the screens. Computer, TV, video games, handheld video games. If it blinks and beeps, the kids sat in front of it today. Three days of school since December 22nd of last year and Mom threw in the towel. We also made brownies, since I decided that enough time had passed since we ate the last of the Christmas cookies that we could once again bake. I say “we” but in reality I made the brownies and Meatball stirred the chips in and licked the bowl while Peanut watched Pokemon.

I already have a favorite brownie recipe, it’s tucked away inside every box of Baker’s unsweetened chocolate, but the February/March 2018 issue of Cook’s Country magazine had a one bowl brownie recipe in it, and they’ve not yet steered me wrong. What really interested me was that this recipe also had several variations, including White Chocolate Raspberry Brownies. I had a comically teeny (3 tablespoons) jar of raspberry jam and some white chips in the pantry, so I didn’t even have to brave the now dry and perfectly safe roads!

Original recipe is below, my notes are in bold. This recipe is slightly altered from the original in that I incorporated the instructions for the white chocolate raspberry variation into the text of the original chocolate chunk brownies recipe.

Easy White Chocolate Raspberry Brownies (serves 8-10) When I math this out, I get 24 brownies, which at 2-3 brownies per person means either this serves way more people or someone is FINALLY incorporating actual consumption into serving size here. 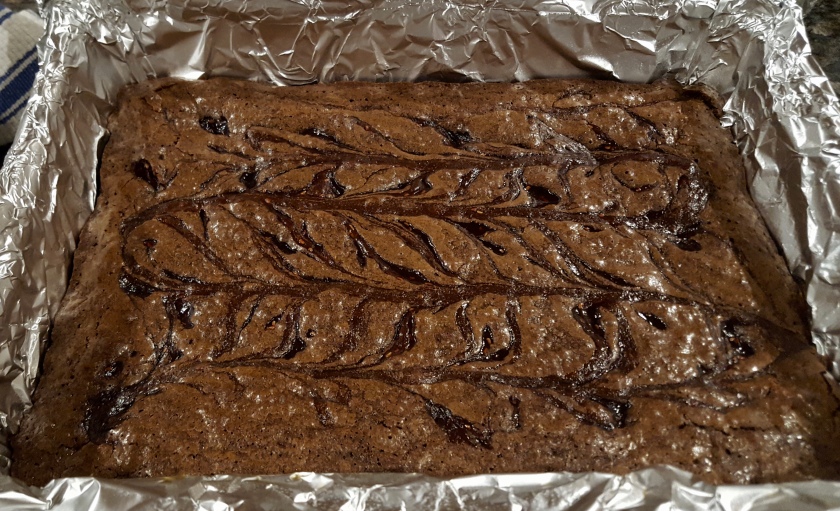 There are three more variations: Nutella-Hazelnut, Chocolate-Mint, and Peanut Butter-Marshmallow, plus the original recipe in the magazine. If you happen to come across it at the store, it might be worth picking up! I also recommend the Fried Brussels Sprouts.